So what excuses can I concoct for not cycling to work today. Well first I woke up late after a sleepless night fretting about all the stuff I’ve not done because I’ve been bicycling my life away. Then I remembered that I had no pedals. This pretty effectively scuppered any journey to anywhere.

Having spent my day in a fruitless meeting with my boss trying to persuade him that 30 Days of Biking should become part of my job, thereby allowing me to cycle all day rather than fiddle with figures, I set off to collect my pedals which were attached to another bike. Two sets of dive kit, now two bikes – its all getting a little crowded in my shed (I would say garage, but that makes me sound too posh). Unfortunately however, I only have one set of pedals but that doesn’t strike me as too problematic as I only have one set of legs. It did however take me longer than it should have to realise that there is a right pedal and a left pedal and that you cannot just slap them on wherever you feel like it.

The new arrival is a Saracen something or other with “fancy curved tubing which is elliptical” and “cro-mo”, all of which is meaningless to me, and it is topped off with a champagne bottle top on the stem presumably following its official launch by the Queen. It has a retro look (ie is old) and I love it because it’s red, and that’s about as far as my knowledgeable critique goes. What I do know is that tonight I did what my good friend born-on-a-bike-Emma told me to do – I went back to some of those niggly little hills that had conquered me and forced my feet onto the tarmac previously, and I flew up them with all my extra new gears. What’s more I flew up them in not even the lowest gear because I forgot to change the lever on the left hand side, such was my excitement.

So this is good – this is better than good – this is excellent. It widens the range of routes I can do enormously and it boosts my confidence beyond belief because it makes me realise that it wasn’t ALL my fault that those hills seemed so thigh burningly hideous. I guess it’s like DIY, if you don’t have the right tools for the job, don’t bother, move house. Now I feel I’m moving into “right tool” territory without spending a shed load of money.

In fact I spent nowt as I swapped the bike for an excellent bottle of Luddenden Valley wine (https://www.facebook.com/LuddendenValleyWines?fref=nf ). My dear friend and neighbour Ian who agreed to the more than generous trade also spent the afternoon tinkering it back into life (the bike, not the bottle of wine) as he had left it languishing in his shed for some time in favour of something more fashionable and youthful. I therefore feel a deep empathy with my new wheeled companion as a similar thing once happened to me; well sort of. I wasn’t exactly left in a shed.

Anyhow – no stopping me now. Onwards and upwards with my feet off the ground. 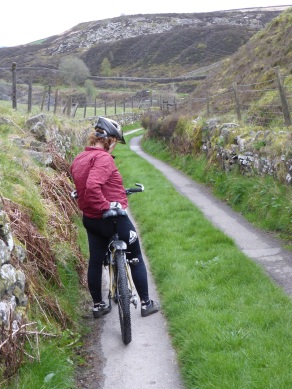