On Mondays I volunteer in Cycle Recycle in Hebden Bridge, so after the school and nursery run I pedalled off from Mytholmroyd to Hebden Bridge. I’ve done this journey a thousand times, and there’s three or four variations to the route I usually take. However, today I added another path to the options – one I’d seen from the train, but never actually been down – running alongside the railway line on the opposite side of the tracks to the river. It’s one of my favourite things about the Calder Valley – there’s so many paths, there’s always another to discover, and (on foot at least) you can wander along fairly aimlessly and know that there’ll be a left or a right up ahead that’ll allow you to head back to town or round in a loop (walking elsewhere we’ve been caught out – ending up on epically long walks or freestyle bog crossings due to the lack of paths). I also like the fact that up on the moors and along the valley sides, with so many paths you can often walk for miles without seeing another soul – unlike many of the National Park areas where the well trodden paths are positively congested with people.

If you’ve not already got a copy, you really should buy The West Yorkshire Moors by Heptonstall resident Chris Goddard. He’s painstakingly followed and drawn many more paths than are shown on an OS map. While I’ve discovered many of them through running with Calder Valley Fell Runners, there’s always another to find, plus the book contains all sorts of interesting information about the history of places along the way. 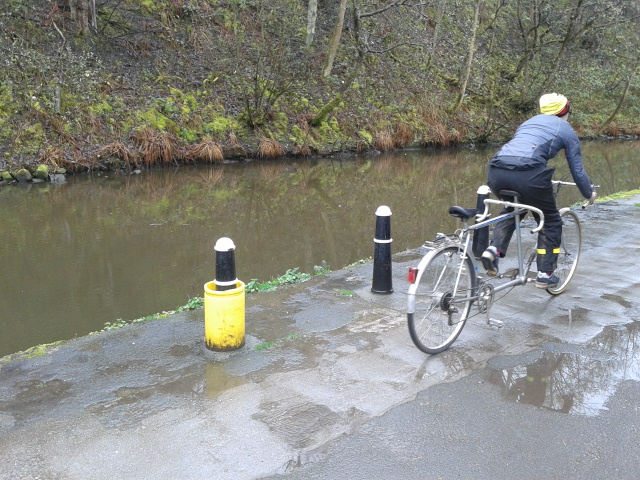 A certain Queen song comes to mind. And it’s not ‘I Want to Ride My Bicycle’….

My second pleasure of the day was putting an old tandem back together. When I started on it, it had one saddle, one set of handlebars, no chains, and one wheel. By the end of the day I had a bike that went. Not perfectly – the gears still needed adjusting – but nevertheless, it went. Very satisfying to have learnt some new skills and put them to good use. I would have done a lap of the park to celebrate, but sadly it was just me in the workshop today, so a short solo straight along the canal had to suffice.