Still in the Lakes, today was easily solved by the arrival of my Aunt.  She persuaded the train to stop at Seascale (if you want to get on it, you have to wave at it like you would a bus) and stepped off with her Brompton.  At sixty-something, my Aunt doesn’t own a car, having sold it when she retired.  She’s something of an advert for how to live without a car.  As well as her Brompton (used for journeys where she’s also taking the bus or train), she a has a Dawes touring bike, and a utility trailer.  She uses the trailer to lug piles of vegetables home from her allotments, and for the occasional trip to the supermarket, and then the Dawes for generally getting about, as well as epic touring holidays around the UK and Europe.  This year she’s planning a tour of 1000 miles in 6 weeks.  While she’s always been a practical, hands on kind of person, she hasn’t always been a cyclist, and while she’s undoubtedly fit, she’s no lycra-clad racing snake.  So, for anyone out there who thinks they’re too old, too inexperienced, or too intimidated to get on their bike, I say think again – you don’t need to go the whole hog and ditch the car completely, but if everyone did a few more journeys by bike the world would surely be a better place?

Half way up the hill

Now I think I’m fairly fit and strong, however my Aunt must have thighs of steel.  She told me her Bromptom was low geared, and sent me off on a short loop that took in a short but steep category 4 hill.  A bit of a wrestle with the butterfly handlebars on the way up the hill and I just made it to the top without grinding to a halt.  Wondering whether I’d got the gears all wrong, I had a bit more of a play with the 6 different gears, but no, I had been in the easiest gear, and struggled to turn some of the harder ones – some of her gears I would only use while pedalling downhill at speed, something I’m not too likely to do on a Brompton.  That said, I did managed 44.6kmph on a descent on a 14% hill before my nerve gave way and I feared hitting a pothole and going flying.  So, just a quick 5km loop before the rain started, but a ride nonethless. 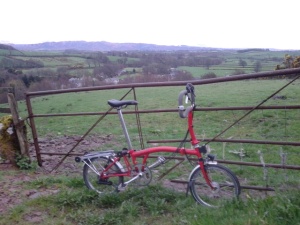